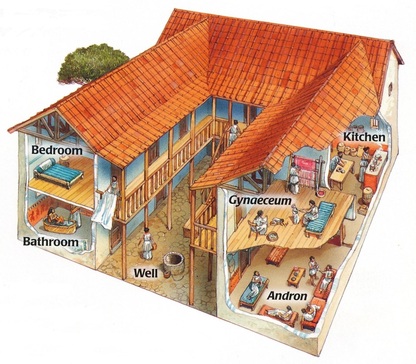 The homes in Ancient Greece are, basically, designed to keep their occupants cool in the hot summer months, and warm in winter. They were made of dried mud-bricks with pottery roof tiles. Because they had dried mud walls, they needed 'repairing', or rebuilding every few years; thieves where often referred to as 'wall pierces' because they gained entry to the house by breaking down its' walls.

Poor peoples homes were generally one, two or three rooms. Because these families could not afford lamps, they woke up at sunrise and went to sleep at sunset. The cooking was done outside in a camp fire outside for most of the year. When the weather turned unfavorable, the cooking was taken into the 'kitchen'. This 'kitchen', had a hole in the roof so the smoke could escape.

A rich persons home was often large and with several rooms. These rooms were arranged around a courtyard because that's where a lot of the families time was spent. Homes of the wealthy were divided into 'women's' and 'men's' sections. The women were kept away from prying eyes; you would find them in the furthest point away from the Andron so as to keep them safe from males that were not a part of the family.
The women's room was called the 'Gynaeceum'. In this room the females of the home could sow, weave and relax. The gynaeceum was usually located on the second floor of the house as it was the furthest place away from the males room, the 'Andron'. Males tended not to enter this room as it was the women's quarters.
The Andron was a room reserved for the males of the house. Females were not allowed to enter this room as it was used for symposiums;drinking parties that were held exclusively for males. The Andron was generally located on the bottom floor so that it could be easily accessed by the male guests attending the party.
In the other parts of the house there were the bedrooms, slave rooms, work rooms, kitchen, bathroom and store rooms. Most of these rooms were located downstairs. All except for the bedrooms which normally could be found on the upper story.
The major feature of rich peoples homes was the courtyard. They were the center of activity. Females spent a lot of time there. Stories, eating and general relaxing was done here. Out here also, you would find the families well. By having a well meant that the family have much easier access to water. Only some families had a well though; most families had to get water from the local town pump/well.

Men
Men had it pretty good in Ancient Greece. Only they could become full citizens. They ran the government and they had full rights (only if they were 'free', not a slave).
Men were often away from home. They could be fighting for the army, tending to crops (overseeing or working), hunting, fishing, sailing. They also enjoyed many activities like horse riding, drinking parties and competing in the Olympics.

Women
Being a women in Ancient Greece was a much harder job. They were completely ruled by the men of the time. They had to get their husbands permission to do pretty much anything: visit temples, female neighbours and funerals. All they were expected to do make clothes, run the household, bear sons (daughters were less important) and sometimes managed the finances. However, slaves did the domestic work like cooking and cleaning.
They were also forbidden to watch the Olympic games as the competitors competed in the nude.