Greek mythology contains some of the most famous myths and legends of all time. Some of the most well known legends are Pandora's box, Heracles (Hercules), Perseus, and The Labyrinthine.

Pandora's Box:
Pandora was, what is believed to be, the first woman. Her name (Pandora) means 'all-gifted' or 'all-giving'. Hephaestus was instructed by Zeus, to make her from the earth as he, Zeus, was angry with Prometheus for giving man the gift of fire. However, Prometheus was scared of what Zeus would do so, he warned his brother, Epimetheus, not to except any gifts from Zeus. But, Epimetheus ignored him and excepted Pandora from Zeus as a gift.
When Pandora came down to the earth, she had been given a jar (now called a 'box') that contained all of the evils of the world. After a while, Pandora became curious as to what was residing inside the jar/box; so, out of curiosity, she opened it, hence releasing all of the evils inside it into the world. Only one spirit remained in the jar/box; it was Hope, for Pandora had closed the lid before Hope left as well. And that was the way Zeus had intended it to happen.
From Works and Days By Hesiod
(verse 96-99)
Only Hope was left within her unbreakable house,
she remained under the lip of the jar, and did not
fly away. Before [she could], Pandora replaced the
lid of the jar. This was the will of aegis-bearing
Zeus the Cloud-gatherer. 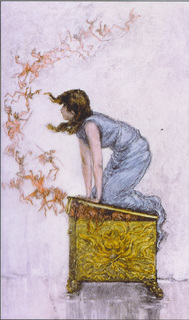 Greek mythology also contains (what is now) famous creatures. Some of the best known are Pegasi, Centaurs, Cerberus and the Hydra.

Centaurs
Centaurs are creatures with the torso of a man and the body of a horse. They are usually the sons of Kronoss, the Lord of the Titans until his sons, Hades, Poseidon and Zeus, overthrew him.
The most famous centaur is Chiron. He was the only immoral centaur. He was the tutor of many famous heroes including Achilles and Hercules. 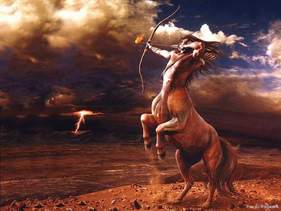