The only other God that you would expect to find here is Hades. Because he is the God of the dead and resides in the underworld and not on Mt. Olympus, he is not included in the 'The Twelve'. It didn't help that the Ancient Greek people don't like him very much. 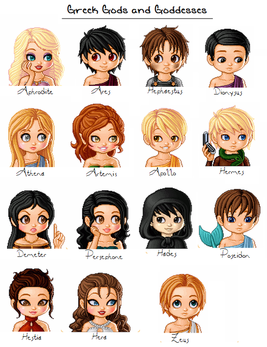 Aphrodite is the Greek Goddess of love and beauty. She is eternally young, gorgeous, and is what is seen as perfect by many.
No one is really sure of how Aphrodite came to earth. Some say she is the daughter of Zeus, while others believe that she was born from the sea foam that bubbled around Oranos when Kronoss slew him.
Aphrodite was known for helping heroes with love affairs. One affair involved beginning the Trojan war. Zeus was given the task of choosing the most beautiful Goddess on Mt. Olympus. He didn't land himself in strife, so, he handed the Golden Apple to a mortal named Paris. The Athena, Hera and Aphrodite came to him, offering many things in the hope of him handing them the Golden Apple. Aphrodite offered him the most beautiful woman on earth for a wife; her name was Helen. Athena and Hera were outraged, and thus brought about the Trojan War.
Embarrassing Moment...
Aphrodite was involved in a rather sticky love situation herself. she was married to Hephaestus, the God of fire, but she loved Ares, God of War. Hephaestus knew about this love triangle so he decided to embarrass the two lovers by catching them in bed. He made a net of wire, so thin, it was almost invisible, while still remaining very strong. He placed it over their bed and when the went to bed that night, he released the net, catching them. he invited the other Gods and Goddesses to come and jeer at them. Talk about being caught in the act.